Dear First-Year Students,
Navaratri is a great Wesleyan tradition you should know about….Also, Indian food by Haveli Restaurant will be sold before each of the performances, Fri-Sun.  So come and check it out!  (Also, for those of you who danced the South Indian dance in the Common Moment, you can take a free dance workshop on Saturday or attend the performance of South Indian dance by this incredible Chicago-based company on Sunday.)
Best, Pamela Tatge ‘84, Director, CFA

The Center for the Arts Presents the 33rd Annual

Navaratri Festival of India
Free Ticket to One Navaratri Event for First-Year Students! 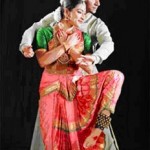 What: Navaratri, one of India’s major festival celebrations, is a time to see family and friends, enjoy music and dance, and seek blessings for new endeavors. Wesleyan’s 33rd annual festival will again celebrate traditional music and dance while at the same time giving audiences a glimpse at the contemporary arts scene. Festival activities include performances by some of India’s leading performing artists, a film screening, an Indian dance party, and an honoring of Navaratri’s religious traditions at a culminating worship service. See below for a listing of events.

Admission: Free Ticket for First-Year Students! Various prices for others.

To redeem offer or get more information: Stop by the box office on the first floor of the Usdan Center, or call 860-685-3355 and identify yourself as a first-year student

Kadri Gopalnath: South Indian Music
Saturday, October 3, 8pm. Crowell Concert Hall
Saxophonist Kadri Gopalnath is one of the pioneers of Karnatak music on this instrument. His acclaim has continued to grow attracting, international attention for his performances in concert halls and jazz festivals worldwide.

For more information and a full listing of Navaratri events, visit http://www.wesleyan.edu/navaratri