The Office of Residential Life is currently accepting applications for a Community Advisor (CA) position for the upcoming spring 2012 semester.  Community Advisors are responsible for meeting the needs of their neighborhood residents in both woodframe houses and apartments and play an important role in establishing a community/environment conducive to maximizing academic, personal, and social development; maintaining healthy and safe living conditions; and providing overall support of the mission of Residential Life.

For more information about the position, and to submit an application, please go to our website at https://www.wesleyan.edu/reslife/Forms/spring_community_advisor_application.html  .Please note: priority consideration will be given to applications received by Mon., Dec. 5.

Samsara is Wesleyan’s South Asian Cultural Show! Over the years, we have collected all of Wesleyan’s biggest and most talented South

Asian enthusiasts to put on exciting shows about all things South Asia. This year we’re thrilled to be hosting two dance teams, one from Brown University and one from Yale University, along with different groups on campus to celebrate the wonderful culture. All proceeds for the event will go to Brighter Dawns!

The show is DECEMBER 3RD at 8:30 PM in Crowell Hall. Tickets are on sale NOW at the Box office.

The Wesleyan American Medical Student Association is hosting a Bone Marrow Registry drive this Friday, December 2nd, at USDAN 110 from 1:30-5 to find a match for Louis, a 6-yr old who has been diagnosed with leukemia. Participating only takes a few minutes so please stop by to potentially save a life.

Expression is an integral part of behavioral health treatment. The doctors at Westchester Medical Center struggled to get the children there to express their ideas and feelings across; some were physically unable to do so, while others were unwilling. I worked in the Behavioral Health Center at this hospital, and after deliberating with my boss, I started an expressive therapies class every Tuesday.  There was only one slight catch – there was very little talking allowed.  The class was in American Sign Language. I worked with young children between the ages of 4 and 13, none of whom were deaf or had known any sign language previously. The idea was that if they weren’t willing to vocalize their feelings, maybe they would sign them instead.

The idea seemed really interesting to me, but I was unsure how successful it would be.  Luckily, it worked much better than I could have imagined. After I

spent a day teaching the kids different signs, we’d have a group session and they would sign to me what they were feeling that day.  Then they would talk about it if they felt comfortable enough doing so. It wasn’t always easy for them, but using sign to break the perceived communication barrier really helped facilitate the discussions.

Eventually, the kids really looked forward to seeing me; I wasn’t just a psychiatry intern with a fancy badge on the medical team – I was a friendly face that they could joke around with and share ideas and feelings with. The comfort the kids felt allowed me to help them in ways that the psychiatrists and therapists could not. They now had a skill that they could revert to whenever they felt like they couldn’t talk to any of the people around them.

Sign Language gave these kids the gift of expression. It’s also given me the same gift for one of my hobbies now is signing songs. I perform songs in ASL in schools around Connecticut and record videos and put them on YouTube for both deaf and hearing people to enjoy. It’s quickly become a passion of mine. Expression is key. It’s helped the kids at the hospital get their feelings out, and helps me portray music to people who cannot hear.

Come find out how to apply for this $10,000 grant to support projects promoting peace during the summer of 2012.  All Wesleyan undergraduates are eligible to apply and interested applicants are strongly encouraged to attend one of the info sessions. Applications are due Friday, January 27.

You’re cordially invited to Professor Rachel Rubinstein’s lecture this Wednesday evening in PAC 002 at 8pm.  As a part of the Jewish and Israel Studies Program lecture series this semester, Professor Rubinstein will speak about her recently published book, Members of the Tribe: Native America in the Jewish Imagination. Her lecture is entitled “Tribal Longings, Enlightenment Selves: Indians, Jews, and the Making of American Identity.” Rubinstein is Associate Professor of American Literature and Jewish Studies at Hampshire College.

In her book, Rubinstein examines interventions by Jewish writers into an ongoing American fascination with the “imaginary Indian.” Rubinstein argues that Jewish writers represented and identified with the figure of the American Indian differently than their white counterparts, as they found in this figure a mirror for their own anxieties about tribal and national belonging. Through a series of literary readings, Rubinstein traces a shifting and unstable dynamic of imagined Indian-Jewish kinship that can easily give way to opposition and, especially in the contemporary moment, competition.

Please join us on Wednesday evening.

Please join us tomorrow in CAAS’s Vanguard Lounge for the final speaker in the First Book Series.

Anthropologist  Oneka LaBennet ’94 is Assistant Professor of African-American Studies and Women’s Studies at Fordham University. She received her Ph.D. in Social Anthropology from Harvard University in 2002. She will discuss her first book,  She’s Mad Real: Popular Culture and West Indian Girls in Brooklyn (New York University Press, 2011), an examination of West Indian adolescent girls’ complex negotiations of raced and and gendered identities within the context of American and Caribbean popular culture in Brooklyn. LaBennet is also Research Director for the Bronx African American History Project (BAAHP) where she leads a hip hop history initiative.

The talk will be followed by a book signing.

The event is free and open to the public.  For more information, please contact Joan Chiari in AFAM at ext: 3569.

You are cordially invited to a

R.S.V.P. to Susan Kulesza at skulesza@wesleyan.edu by Tues., Nov. 29

Sponsored by the Office of Residential Life and the Deans’ Office 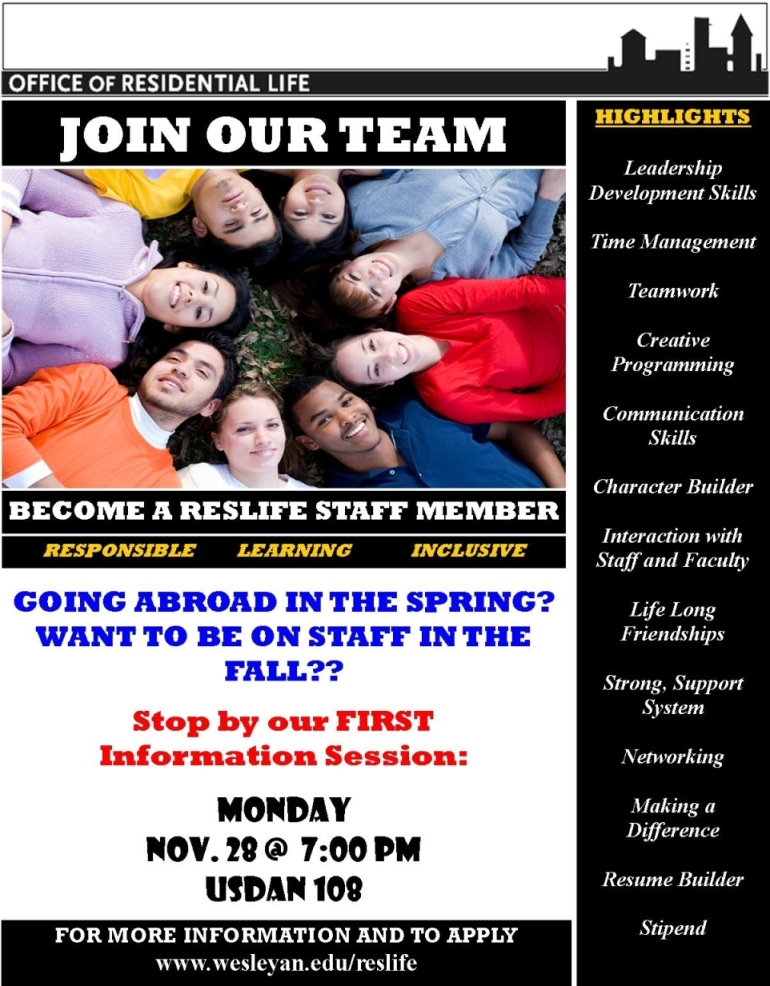