In February of my sophomore year (2011) I received an email from a web developer at The New York Times. He had found me 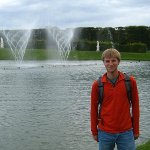 from his twitter followers and was wondering if I’d be interested in a summer internship within their Interactive News Technology group.  After a few interviews I ended up with the internship that year. This summer I returned, but no longer as an intern. I was hired as an Interactive News Developer to finish and run the project that we had started during my internship: The Times’ London 2012 Olympics website: http://london2012.nytimes.com/.

I worked with the team to create an interactive website that aggregated real-time results, pictures, videos and news from the Olympic Games on an utterly inflexible schedule – the Olympics was starting July 27 whether we were done or not. Along the way I got a real taste for what working in the newsroom is like; I learned how to build and run a website that’s visited by millions of users in multiple languages; and I experienced the difficulty of the work-life balance.

Wesleyan can be stressful, but when my phone buzzes at 3am I am no longer nervous that a New York Times website is broken, and they’re waiting for me to fix it.

The internship that I did is still open to applications until October 27: http://www.nytimes-internship.com/internships/interactive-news,