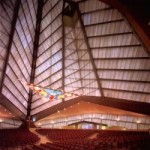 In a suburb just north of Philadelphia stands Beth Sholom Synagogue, Frank Lloyd Wright’s only synagogue and among his finest religious buildings. Designated a National Historic Landmark in 2007, Beth Sholom was one of Wright’s last completed projects, and for years it has been considered one of his greatest masterpieces.

The talk is based on Professor Siry’s recently published book The Beth Sholom Synagogue: Frank Lloyd Wright and Modern Religious Architecture.”  The book has been praised as “a work of art in its own right” (The Forward)