Sacrifice and Sacrality: Religion and Environmentalism in South India 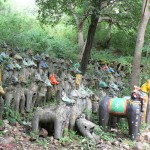 An exploration of how, with the deepening of India’s environmental crisis, activists have claimed “sacred groves” in new ways. NGOs have declared these small forests, previously dedicated to a deity, as an ancient indigenous ecological tradition, and have sponsored projects across India to restore degraded ones.

Eliza Kent is an Associate Professor of Religion at Colgate University whose research interests center on religion and ecology, the religiosity of low-caste communities in India, and the effects of religious pluralism.

Sponsored by the South Asian Studies Certificate and the Department of Religion.