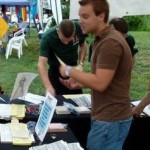 organization. Since Pennsylvania has no state law that protects its residents from discrimination on the basis of sexual orientation and gender identity, PDN has proved instrumental in passing local laws, making Pennsylvania the state with the most inclusive local laws but no state law. During my time at PDN, I focused largely on non-discrimination policy reform and legislative action. I spent a large amount of my time going to pride festivals and getting attendees to sign letters to their federal legislators to support a battery of bills currently in Congress that would aid non-discrimination reform—from passing ENDA, to repealing Don’t Ask, Don’t Tell and restrictive immigration policies.

A secondary focus of my internship was a photo project called “575 Same-Sex Couples: Facing Inequality,” which gave a face to Pennsylvanians who are discriminated against due to the lack of inclusive state laws concerning discrimination and marriage equality. For the project, PDN photographed couples exclusively from the Lehigh Valley area (where we are centrally located) and tabulated data about the couples, such as the number who have raised children or work as medical professionals, just to name a few. For the project, I worked principally at recruiting couples at pride festivals as well as editing and framing the photographs. Currently, the photo project is being featured at Bucks County Community College in hopes of aiding judiciary action in the area.

Before leaving home, I began the process of reforming my old school district’s non-discrimination policy to include sexual orientation and gender identity. Though this process could take up to a school year to fully reform, I am optimistic that these changes will be implemented and that LGBTQ students at my old school will never need face the same type of discrimination that I had to face growing up in Pennsylvania.