The Cinema Hold Up is a vibrant, authentic, and wonderfully observed portrait of the tempo and texture of today’s Mexican 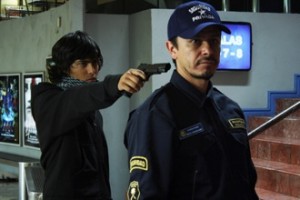 youth culture. First-time feature director Iria Gómez Concheiro draws pitch-perfect performances from the talented ensemble cast and registers a strong and original voice in Mexican cinema. Negus, Chale, Sapo and Chata are teenagers who grew up in the same rundown district of Mexico City. They spend their days listening to hip-hop, smoking marihuana and fantasizing about the opposite sex. One day they have the bright idea of robbing a movie theater, jeopardizing the one sure thing they have in life – their friendship. An explosive, entertaining comedy with impeccable performances, this original, unpredictable debut establishes Iria Gómez Concheiro as a promising new voice in Mexican cinema. Gómez Conchiero acknowledges a debt to Italian neorealism and Brazilian Novo Cinema, and she has a liking for gritty locations, long tracking shots and non-pro actors. The film premiered at the Sundance Film Festival.

Presented as part of The Spanish Film Club series with the support of Pragda, the Secretary of State for Culture of Spain, and its Program for Cultural Cooperation with U.S. Universities. In collaboration with Wesleyanʼs Latin American Studies program and the Department of Romance Languages and Literaturesʼ Thomas and Catharine McMahon Fund.