On a College of the Environment Fellowship, I returned to Tanzania (after having spent the fall semester there) to do research for my thesis. I wanted to look into small-scale collaborative conservation projects, particularly ones managed by local 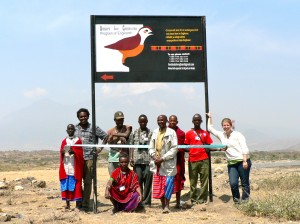 communities: “true” community-based conservation. As someone very interested in bird conservation, if these projects included birds, I knew that would just be an ultimate bonus. By some stroke of luck, I was made aware of a village conservation project for a critically endangered bird in the small Maasai village of Engikaret, near the Kenyan border. And so I went to go study the Beesley’s Lark and conduct interviews about this conservation project.

In those weeks of my field research and village interviews, I fell in love with this bird and the people of Engikaret, but found out there was actually no conservation project in place, and that they in fact wanted one. Their argument: if we have an endangered bird that is only found here, and tourists will pay to come see it, we will happily help preserve this bird’s habitat so we can use the income from ecotourism to benefit our community. And they were just waiting for an opportunity to put the pieces together.

In short, I ended up actually doing the thing I had intended to do research on. Together with some Maasai leaders I had become good friends with, I helped found the Beesley’s Lark Conservation Program of Engikaret (BLCPE). After weeks of “business” meetings (conducted in both Maasai and Swahili) and a variety of other tasks – such as drawing up bylaws, getting government accreditation, and creating info sheets, a website, and ID cards – we really had something started. I had a big signboard made for the road to help attract more visitors, and I took 3 young Engikaret villagers out into the field and taught them how to identify all the fauna of the area, with special attention to how to find and identify the Beesley’s Lark. (Although my Swahili is pretty good, my Maasai is sorely lacking; this training involved many a moment in which I physically reenacted the posture or behavior of each bird species, for lack of appropriate Maasai terminology with which to describe it – and, as expected, everyone found this quite hilarious.)

BLCPE has only just gotten started. My plan now is to generate some funding to go back after graduation and spend several months helping to build a small visitor’s center, get some baseline publicity for the program, train a few more guides, and generate some conclusive survey data on this highly endangered bird. This kind of work, although unconventional in nature, sends an important message: no matter who or where, people can and should benefit from their own environmental stewardship. In a nation where communities have been forced off of their land and receive no benefits from the preservationist model of conservation by closed-access national parks, small-scale community-based conservation like BLCPE might just be the way to both environmental conservation and environmental justice.