This past summer, I decided to take a bit of a risk, and I spent six weeks learning how to take a bucket 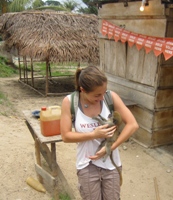 shower, haggle incredibly cheap prices in a foreign language, and, hopefully, a little bit of something to write in my senior thesis. On June 9, I got on a plane and headed out to Sierra Leone, to my parents’ great concern. Sierra Leone is a small country in West Africa, famous for its diamonds, child soldiers, and the bloody conflict that razed across it from 1991-2002. Although the conflict has ended, Sierra Leone still resides close to the bottom of every global list involving money and fiscal prosperity.

But I did not entirely think about what colossal poverty would mean when I got on a plane leaving London Heathrow, heading out to a new continent, on my own, with people I had never met before awaiting my arrival. In retrospect, it was a bit stupid; if I had not gotten incredibly lucky and been adopted by a generous local family, I would have had a much rougher time. But even with a family that cooked for me, took care of me, and introduced me to more friends than I could talk to, I still had some immense challenges to overcome. In the space of six weeks, I was bit by a dog (yes, I got my rabies shots), infected by a parasite (thank god for cheap medical care), and had about $350 stolen. Over there, that’s an awful lot of money, and my friends and family were absolutely floored at the amount. Every day, I met new challenges, from learning a language, to getting yelled at every time I walked down a street, to being squeezed into the back of a rickety bus and praying that it managed to avoid the open gutters.

But it’s not all bad. I met some of the most incredible people I will ever meet and built relationships that I think will last me the rest of my life. Oh, and I did the research for my senior thesis. Even though that was the salient reason for flying across the Atlantic, I had so many intense experiences in Sierra Leone that academics can start to feel like a detail. I did forty interviews with native Sierra Leoneans aged 18-28, trying to start gauging the effects of growing up with omnipresent violence on social and ethical development. I asked questions like “How would you define the word “victim?” and “Do you think war is necessary or inevitable?”

I don’t yet know what academic knowledge I’ve gleaned from this trip – the many requisite hours for a senior thesis over the next year will reveal that. But I do know that I learned how to wash my clothes by hand, I learned what foods to eat when you’re sick and without medicine, and I learned a new, stronger definition of what constitutes a relationship and binds together a community.