In association with Mixed Signals:  Artists Consider Masculinity in Sports on view at the Ezra and Cecile Zilkha Gallery through October 23, 2011  http://www.wesleyan.edu/cfa/events.html#exhibitions.  Co-sponsored by ARHA and PHED. 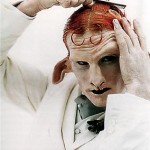 Winnerof the Guggenheim Museum’s inaugural Hugo Boss Award (1996), Matthew Barney entered the arts world to almost instant controversy and success after he graduated from Yale University in 1991. Known for his intermingling of sports and art, his Cremaster films are a series of visually extravagant works that feature Mr. Barney in myriad roles, including characters as diverse as a satyr, a magician, a ram, Harry Houdini and even the infamous murdererGary Gilmore. The ongoing Drawing Restraint series was started in 1987 as a studio experiment, built upon the athletic model of development in which growth occurs only through restraint (i.e., literally restraining the body while attempting to make a drawing). Drawing Restraint 10 features Mr. Barney jumping on a trampoline which has been set at an angle, attempting to draw two linked field emblems on the ceiling.