“Speech and Independence:  The Wrongs of Corporate Speech”

Director of the Edmond J. Safra Foundation Center for Ethics 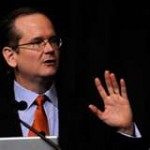 Lawrence Lessig is the director of the Edmond J. Safra Foundation Center for Ethics, and a Professor of Law at Harvard Law School. Prior to returning to Harvard, he was a professor at Stanford Law School,

where he founded the school’s Center for Internet and Society, and at the University of Chicago.  He clerked for Judge Richard Posner on the 7th Circuit Court of Appeals, and Justice Antonin Scalia on the United States Supreme Court. For much of his career, Professor Lessig focused his work on law and technology, especially as it affects copyright. His current  work addresses “institutional corruption” — relationships which are legal, even currently ethical, but which weaken public trust in an  institution. He has won numerous awards, including the Free Software Foundation’s Freedom Award, and was named one of Scientific American’s Top 50 Visionaries.